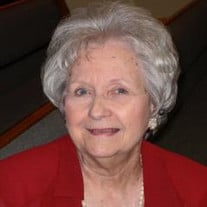 Hatch, Antonia Fay, aged 87, went peacefully to be with her Lord and Savior, Jesus Christ on August 23, 2019 in Winter Garden, Florida. The visitation will be from 2:00 p.m. to 3:00 p.m. Saturday, September 28, 2019 at Bolton Funeral Home. The funeral service will follow at 3:00 p.m., at the funeral home. Burial will follow at K-Springs Cemetery in Chelsea. Bolton Funeral Home is directing. She was born in Roanoke, Alabama to Rev. Andrew Wade Benefield and Mary Velma (Greene) Benefield. Fay, as she liked to be called, grew up in Alabama and Florida with two younger brothers, Richard and Dale. After graduating from Eustis High School, Eustis, Florida, she attended Anderson College, Anderson, Indiana where she met her future husband, Rev. Wilber B. Hatch. She and her husband were married over 60 years in which they added to their family daughters, Diane, Darlene, and Denise. Fay was active in fulltime ministry with her husband for over 40 years with Wilber serving as Senior Pastor in Church of God (Anderson, Indiana) congregations in Florida and Alabama including K-Springs Church of God, Chelsea, Alabama. She was involved in music ministry, planning and leading choirs and worship services, as well as special programs and events. Fay is preceded in death by her parents, husband, brother: Richard Benefield, and son-in-law: Alan Reed. Fay is survived by her three daughters and their spouses: Diane Reed, Darlene (Kevin) Wahaus and Denise (Bill) Webb; seven grandchildren: Rachel (Ryan) Bertschman, Kyle Wahaus, David (Mallory) Reed, Alyson Wahaus, Hannah Wahaus, Matthew Reed and Ashley Webb; seven great-grandchildren: Noah, Katie, Isla, Asher, Eli, Alan and Owen; and other relatives and friends. Please sign online condolences at www.boltonfuneralhome.com.

The family of A Fay Hatch created this Life Tributes page to make it easy to share your memories.

Hatch, Antonia Fay, aged 87, went peacefully to be with her Lord...

Send flowers to the Hatch family.