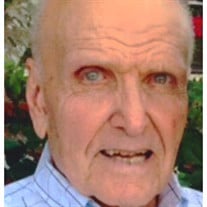 Glenn, Acil Chapman “Ace”, age 93, of Birmingham, formerly of Plainview, Texas went home to be with his Lord and Savior, Jesus Christ, on July 5, 2020. The visitation will be from 10:30 a.m. until 11:00 a.m., Thursday, July 9, 2020 at North Shelby Baptist Church. The funeral service will follow at 11:00 a.m. at the church with Pastor Mike Meadows and Bro. Larry Wimberly officiating. Burial will be at Plainview Cemetery and Memorial Park in Plainview, Texas. Bolton Funeral Home is directing. Acil was born on December 19, 1926 in Tuxedo, Texas to George David Glenn and Francis Irene (Arnold) Glenn. Acil and his beloved wife, Peggy Sue (Weldon) Glenn, moved from Texas to Alabama on January 23, 2008, to be closer to family. Peggy passed away on August 23, 2010. Acil and Peggy were married for 67 years. Acil moved to live with his daughter, Debbie, and son-in-law, Gary, in December of 2009, which he called home for 6 years and 3 months. He later moved to the Col. Robert L. Howard Veterans Home on March 4, 2016 until his passing. Acil was preceded in death by his parents; wife: Peggy; son: James Joseph Glenn; one brother; and two sisters. He is survived by his son: David Michael Glenn; daughter: Deborah Sue Glenn Morgan (Gary Neil Morgan); 7 grandchildren; and 13 great grandchildren. In lieu of flowers, donations may be made to the North Shelby Baptist Missions Fund. Please sign online condolences at www.boltonfuneralhome.com.

The family of Acil Glenn created this Life Tributes page to make it easy to share your memories.

Send flowers to the Glenn family.