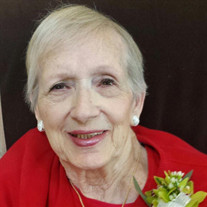 Barbara Jane Crawford, 81, of Birmingham, passed away July 15, 2019, in her home on Belvedere Cove. She was born to the late Bob and Edna Fahrer on December 3, 1937, in Queens, New York, where she grew up and married James W. Crawford in 1961. Together they had four daughters. At the age of 45, Barbara suffered a major stroke which left her with minimal mobility. Through the years she showed tremendous strength, endurance, perseverance, and determination along with a strong will she lived, in the care of her husband, another 36 years, just five months short of her 82nd birthday. Barbara enjoyed the simple things in life, spending time with family and friends, going to church, and having lunch at her favorite restaurant. Her hobbies included; playing on her Kindle, games and doing puzzles, she would say, that's what kept her mind sharp. Being a dancer in her younger years, Barbara loved to watch musical films, singing along and tapping her foot as if to be dancing with them. She enjoyed looking out the window from her favorite chair to watch the birds feed from the feeding box perfectly placed for her to see. Barbara is preceded in death by her parents: Bob and Edna Fahrer; sister: Judith Pruden; brother: William Farher; daughter: Lori A. Hibbard; and grandchild: Bridget Lyons. She left behind her husband of 58 years: James W. Crawford Jr.; three daughters: Carole J. Crawford, Kimberly Wilkerson, and Darlene Lyons; two step children: James W. Crawford III and Sheree Smith; sister: Irene Carbonella; seven grandchildren: Garrett J. Hibbard, Grace J. Soldesi, Alexis Moloney, Kathy Hamilton, Vincent Davis, Quaid Tidwell, and Lori Tidwell; and two great grandchildren: Benjamin A. Moloney and Jaqlyn Pena. She is now in the arms of our Heavenly Father, alongside her daughter, family members, and friends who have passed away before her. She will be greatly missed. No services are scheduled at this time. If you wish to pay your respects, you can do so at Barbara's home address: 1045 Belvedere Cove, Birmingham Alabama, 35242. (205)437-2053 I have fought the good fight, I have finished the race, I have kept the Faith. Now, a crown is being held for me a crown for being right with God. 2 TIMOTHY 4:7-8 I may be gone but please don't cry Death is not the last goodbye Death releases me of my pain There will come a day when we'll meet again Don't be blue and don't be sad Think back to the fun we had I'm always here, I hear you speak In times of trouble it's me you seek You don't see me but I see you I will do my best to pull you through Speak to me and I will hear Never far I am always near Be brave my love do not cry See you again it's not goodbye

Barbara Jane Crawford, 81, of Birmingham, passed away July 15, 2019, in her home on Belvedere Cove. She was born to the late Bob and Edna Fahrer on December 3, 1937, in Queens, New York, where she grew up and married James W. Crawford in 1961.... View Obituary & Service Information

The family of Barbara Jane Crawford created this Life Tributes page to make it easy to share your memories.

Send flowers to the Crawford family.