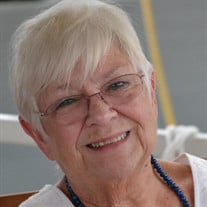 Anne’s precious life left her February 5, 2021 after a brief stay in a local hospital. She was preceded in death by her father Percy Elmore Henderson and her mother Martha Lois Burg. She is survived by her husband of sixty years Joe D. Murphy and her two sons Joel S. Murphy (Pamela) and Jeffery L Murphy and one granddaughter Breann Elizabeth Murphy. Both Anne and Joe grew up in the same neighborhood where they met when Anne was thirteen years of age. They still have many friends in the area where the friendships began in the neighborhood and continues today. Anne earned her nursing degree at Jefferson State after her two young sons started staying in school all day. As an adult in college, she dearly loved the academic and challenges required for the degree. After graduation, she enjoyed her worked in the psychiatric department and in the radiation oncology department at a local hospital until retirement. Anne and her future husband, Joe, were baptized in Five Mile Creek in their youth on the same day years before their marriage. Later in life, Anne converted to Catholicism and received the Last Rites from Father Vimal Backiyaraj, C.P. and was buried with a rosary. Everyone who met Anne fell in love with her including the doctors and nurses she worked with, ballroom dancing club members, the motorcycle group, the boating club members, local knitting club, churches she attended and all of her patients on the psychiatric floor and especially the radiation oncology patients who showered her with gifts on their last day of treatment. She received gifts such as watermelons, blueberry bushes and golf clubs. Her patients loved her because she touched them and held their hands; whereas, many family members avoided touching patients with cancer. She was one kind, caring and loveable individual. Anne will be missed by her family and her many social and professional friends that she has known over her 80 years of life. It will be difficult to forget her smiles and pleasing personality. Anne was buried at 2:00 pm Monday Feb 8 at Highland Memorial Gardens located in Bessemer, Alabama. The family and friend’s grave side service was conducted by long-time friend Reverend Paul Moore and other arrangements were made by Bolton Funeral Home of Columbiana, AL. Sons and friends serving as pallbearers included Joel and Jeff Murphy, father and son Alan and Micah Thompson and good friends Mike Cooley and Carlos Sanders from the Chelsea Observation Patrol. If you would like to honor Anne in your memory of her, make a gift to a charity in her name.

Anne&#8217;s precious life left her February 5, 2021 after a brief stay in a local hospital. She was preceded in death by her father Percy Elmore Henderson and her mother Martha Lois Burg. She is survived by her husband of sixty years Joe D.... View Obituary & Service Information

The family of Elizabeth Anne Murphy created this Life Tributes page to make it easy to share your memories.

Send flowers to the Murphy family.