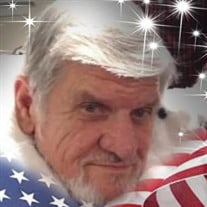 Lewis, Homer Edward "Ed" (Homer E), age 80, of Calera, passed away December 15, 2021 at Shelby Baptist Medical Center in Alabaster. A Celebration of Life service will be announced at a later date. He was born January 22, 1941, in Columbus, GA, to Dorothy Christine Koerner and had two sisters and two brothers (deceased). He served in the United States Army as a Lineman and was honorably discharged in 1963. He also worked with Civil Service at Maxwell Air Force Base in Montgomery, AL. He was a professional paint contractor and retired from the VA Hospital in Birmingham, AL. He married the love of his life, Elizabeth Anne Manning, on March 29, 1964. They had two children, Teresa Anne (Lewis) Horn and Michael Edward Lewis. He had three grandchildren and three great-grandchildren. He reunited with his biological father at the age of 60 and gained five more sisters, another brother, and a wonderful stepmother. They became a blessing to each other and helped lead him to salvation. He loved God and his church family, and served as a Deacon of the church until his health prevented him to continue. He loved Alabama football and his two cats, KiKi and Buster. He was a kid at heart and full of wit, making people laugh; he was a joy to be around; his humor will be missed tremendously. He liked fishing, sports, mowing and working in the yard, as well as watching TV game shows and reruns, especially Gunsmoke and The Virginian. He was better known as "PaPa" to his family who thought he was the best cook in the world. He is survived by his wife Anne; son Michael and daughter-in-law Denise; daughter Teresa and son-in-law David; granddaughter Summer Gillespie (Steven), grandsons Zachary Lewis (Emily) and Jacob Lewis (Madison); and three great-grandchildren, Winter Gillespie and Brantley and Faith Lewis. He will forever be missed by his family and friends. In lieu of flowers, please make any monetary donations to The Branch of Missions Hills, 1669 Mission Hills Rd., Alabaster, AL. Please sign online condolences at www.boltonfuneralhome.com. Revelation 21:4

Lewis, Homer Edward "Ed" (Homer E), age 80, of Calera, passed away December 15, 2021 at Shelby Baptist Medical Center in Alabaster. A Celebration of Life service will be announced at a later date. He was born January 22, 1941, in Columbus, GA,... View Obituary & Service Information

The family of Homer "Ed" Lewis created this Life Tributes page to make it easy to share your memories.

Send flowers to the Lewis family.