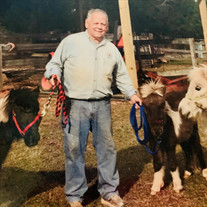 Dr. William C. Jeter, 79, passed away on September 2, 2020 at his home in Columbiana, AL. A family memorial service will be held at a later date. Dr. Jeter, better known at “Dub”, was born on February 2, 1941 in Lakeland, FL. He is preceded in death by his mother, Carolyn Inez Jeter and his father, J.F. Jeter as we all his sister, Frances Jeter Jackson. He is survived by his wife Nancy Jeter of 58 years and their 5 children; Cathy Scroggins (Wade), Mark Jeter (Karen), Brian Jeter (Shelley), Ben Jeter (Dee) and Lynda Johnson (Delaney), a brother, Jeff Jeter (Sue), 13 Grandchildren, 6 Great-grandchildren and numerous nieces, nephews and longtime friends. As a child his family moved to Dade City, FL where he graduated from Pasco High School in 1959, he attended University of Florida for 2 years, then went on to graduate from Auburn University School of Veterinary Medicine in 1967. He served in the United States Air Force at Lackland Air Force Base in San Antonio, TX as a Veterinarian at the base veterinary clinic working with Military Sentry dogs. On June 15, 1962 Dub married his High School sweetheart, Nancy Johnson, in Dade City, FL. Together they raised their 5 children whom he was always proud of and loved deeply. Dub practiced large and small animal veterinary medicine in Dade City, FL from which he retired in 1984 due to declining health. He then transferred and moved his family to Tallahassee, FL and began working for the State of Florida Department of Agriculture in the Division of Animal Industry; where he worked on many animal health programs and with the cattlemen and ranchers throughout the state, promoting animal health regulations and guidelines, until his retirement in 2013. In 2015 Dub and Nancy moved to Columbiana, AL to live out their farm life dream where he enjoyed men’s morning coffee at the neighbor’s barn, working outside when he could, watching after their miniature horses and playing with their dog Sabastian. Dr. Jeter was a devoted husband and father. He was a Christian man, a good friend and always willing to help someone in need. He will be greatly missed. In lieu of flowers you may send a donation to: Childrens of Alabama, Neuro-Oncology Attn: Coke Matthews 1600 7th Avenue So. Birmingham, AL 35233 *Notation in Memory of Dr. William C. Jeter Diabetic Association P.O. Box 7917 Merrifield, VA 22116-9704 *In Memory Dr. William C. Jeter *Notify, Nancy Jeter, 445 Hwy 435, Columbiana, AL 35051

The family of Dr. William C Jeter created this Life Tributes page to make it easy to share your memories.

Send flowers to the Jeter family.